Spicy Laos Hostel is housed in a traditional Laos home. The rooms downstairs are paved with stone tiles, the floors upstairs of creaking wood, the main construction of concrete, with a bamboo roof. The dorms are filled with wooden bunkbeds and thin mattresses.
Downstairs there’s a movieroom with a TV, a DVD-player that seldom works and a cupboard filled with DVDs; the weirdest movies people probably left here. Upstairs there’s a computerroom with slow internet and a computer that crashes every 5 minutes or so, and the balcony, with a low table and many cushions around it.
In the courtyard there’s Grandma’s shakes- and sandwich stand, from where she can also fix you up with any delicious local plate in her big wok. There’s the laundryroom in which I might imagine one of the families live.
It’s great to be in this everyday life like this!

Yesterday, after a first night on town, in this hip and happening club named Utopia, where of course I did run in to Daniel and met his new buddy Cain –26, UK- we went back here because there was supposed to be a party.
It’s much too quiet to be considered party, but I’m having another beerlao large and another hiccaugh.

It ended in the movieroom, with Paranormal II. What a sucky movie. And they told me to watch it all the way till the end “cause that where the cool bit happens” but most of them had left for bed before then, except for Lara –19, UK- who’d fallen asleep on the couch. 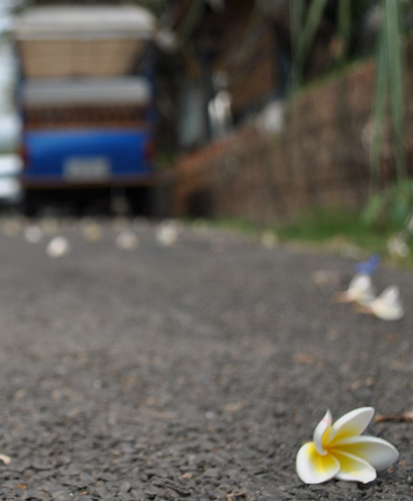 Oh and I suppose this is another thing that’s just bound to happen in Asia – where you take of your shoes before entering.
I took off the very cheap but very comfortable flipflops I’d just bought in Chiang Mai and was very happy with, at Utopia. But they left without me.
I found a pair that looked alike to take – not very karma proof I suppose, or maybe very much so indeed… But instead of leather these have plastic bands and instead a jute sole these are synthetic, and they’re not comfortable at all.
Lucky I still have my old worn-off pair, and hopefully I’ll find the same jute ones again, as these nightmarkets are all so alike.

Today I take the time to get to know this town and stroll about with my cam. After an hour I sit down for a bite at a sweet little terras in front of a livingroom.
And here’s my breakfast: a nice thick fluffy pancake with chunks of mango and honey seaping over it, and a side of pineapple. Coffee here in Laos is, much like the stuff I got in Thailand, is not very satisfying to a selfrespecting coffeelover.
While I’m sitting there the kids come back from scool in their adorable uniforms, run into the back and come out again a few minutes later in simple clothing with a big glass of lemonade at their mouths.
When I ask if I can use their bathroom I’m directed into the back of their home, into their family bathroom, where they have a western toilet installed, and a big bucket of water to flush with.

Halfway Stray
Stray is a hop-on-hop-off bus organisation I travel Laos with.
I hopped on in Huay Xai and saw two cities I´d otherwise missed.
Nam Tha wouldn´t have mattered much.
But Nong Khiaw I´m so glad I got to see! Hidden deep in a forest of huge limestone hills with their viels of mist.
We stopped to visit a Hmong-tribe village but they had no idea what to do with these white giants and were very scared of cameras.
These things made me feel like a stupid tourist again. And I´m sure these people are all very nice – and I love the Kiwi-family for traveling this way – but it´s just not really for me.
Again, lesson learned.

Anyway, three and a half more days of lovely LPB before I Stray on to Vang Vieng, tubing capital.